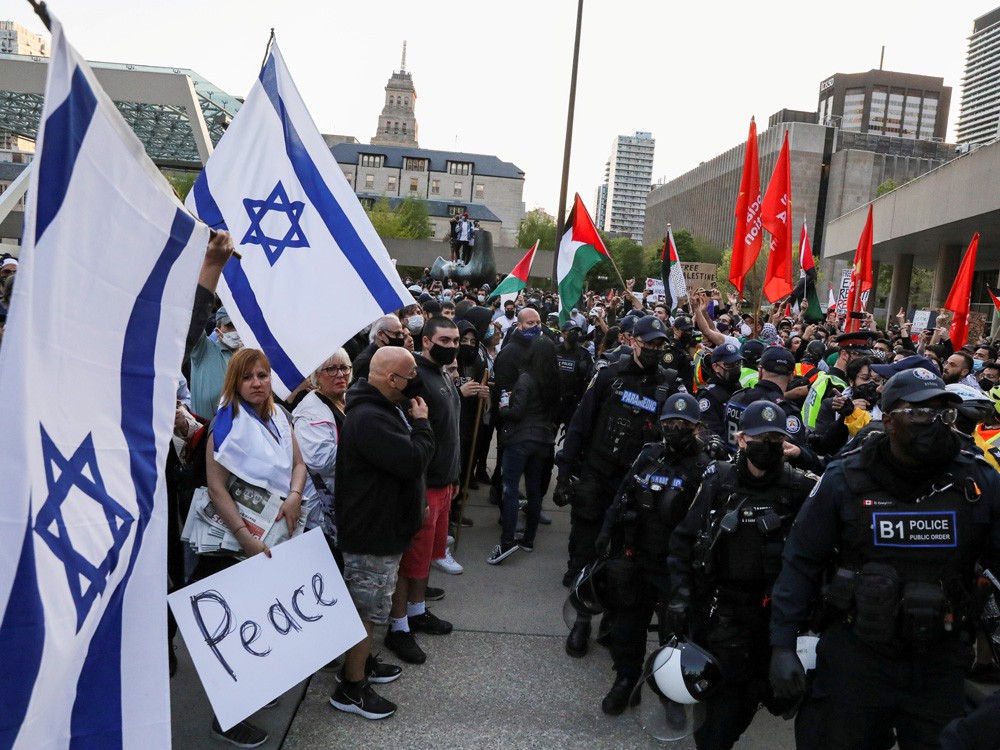 Although it certainly felt like it anecdotally, B’nai Brith Canada has issued a report confirming that attacks against Jews across Canada — many of which included violence — hit a new high in May.

The special report, issued Tuesday night, says Canadian Jews from coast to coast came under attack in May in “unprecedented ways” with 250 known incidents recorded — a figure that does not include many of the online attacks (numbers are still being compiled on the latter).

The 250 recorded include 154 incidents of harassment, 51 separate cases of vandalism and a scandalous 61 incidents of violence.

The 61 acts of violence are the “highest ever reported in one month,” since 1982, when their audits first commenced, the B’nai Brith statement says. That compares to just nine incidents recorded by the Jewish advocacy organization in 2020.

He has been involved with the organization since 2006 and has never seen anti-Semitism like this.

He said during every conflict in the Middle East, there’s an uptick in “blowback” against Jews but it’s been “escalating.”

Certainly they haven’t seen such violence, he said, noting much has been related to a “loss of control” at illegal protests.

Eyewitness accounts and social media posts from the pro-Palestinian rally at Nathan Phillips Square on May 15 show it quickly got out of hand. A small contingent of pro-Israel supporters were followed up Elizabeth St. and surrounded. Israeli Greg Nisan told the Toronto Sun in the aftermath of the protest that seven to eight people surrounded him with sticks and what appeared to be chains covered in a cloth.

He says he “got beaten like a dog” and ended up in hospital requiring seven stitches to his eyebrow and seven staples in his head.

Two charges were laid following the protest and the assault is still being investigated.

The B’nai Brith report says in every single Canadian city where such protests took place in addition to Toronto — London, Winnipeg, Montreal, Calgary and Mississauga — Jews were “singled out and targeted” for abuse by angry mobs of protesters.

They say many of these events devolved into open hatefests with “blatantly anti-Semitic” and “violent” rhetoric.

“These rallies were not the typical kind of civil and lawful political protests with which most Canadians are familiar,” the report says, noting in some cases individuals displaying Israeli flags were reportedly beaten in plain view of the police (video provided to the Toronto Sun from the Toronto rally demonstrates this).

The report also raises the prevalence of “anti-Israel zealots” who travelled to predominantly Jewish neighbourhoods across Canada allegedly to harass and intimidate the people living there.

There was also a disturbing spike in online bullying of Israel supporters, which continues unabated to this day.

I experienced it on Twitter, Instagram and Facebook in response to stories I did on two virulently anti-Israel manuals “curated” by Javier Davila — an equity worker with the Toronto District School Board — as did Jewish teachers within the board who tried to express their concern on teachers’ chat sites with the teaching manuals.

Davila, who is on home assignment pending an investigation, received support from an online petition — signed by a number of labour groups including CUPE and CUPW.

That petition has been circulated by radical leftist activists, teachers, unions and members of fringe anti-Israel groups.

Mostyn said they released the special report because people need to know what’s going on and they need to understand the trend line in this country.

“People say anti-Semitism is no longer a problem in Canada,” he said. “This report just for the month of May indicates otherwise.”

He adds that the anti-Semitism is not coming from neo-Nazis but from anti-Israel extremists.

Previous LEVY: Is Dundas St. to become the new Woke Way? Next LEVY: Canadians should be proud on Canada Day