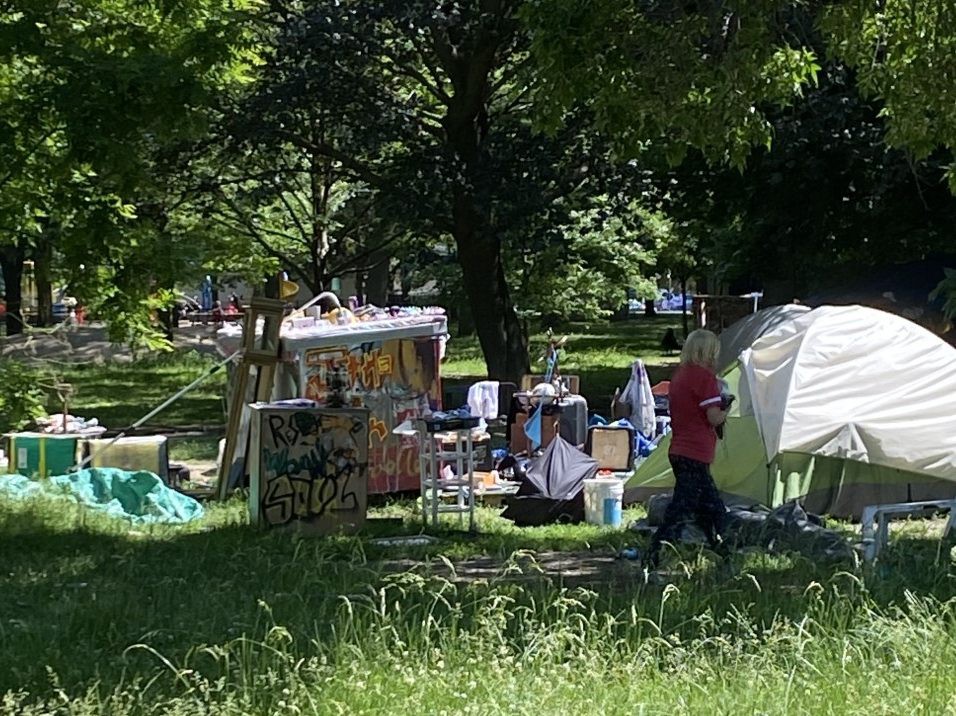 One only has to consider the city’s attempts to remove the 15-odd tents and wood structures at Lamport Stadium on May 19, which resulted in a heated confrontation between the police and activists who seek to enable the tent dwellers to continue living there.

The Encampment Support Network (ESN) activists have even taken to posting various pictures and messages to Mayor John Tory, Mike Colle, Ana Bailao and even Joe Cressy about how terrible it is to insist that tent dwellers be moved inside to a hotel shelter where each of them have their own rooms, bathrooms and three healthy meals a day plus snacks.

Look, I’m not in agreement with the use of expensive hotels to house the homeless — especially given that the communities were not consulted beforehand and now face issues such as vandalism, break-and-enters, drug dealing and assaults, which continue to be downplayed by the police, councillors and city officials.

But for heaven’s sake, some of our neighbourhood parks have been turned into veritable s—holes not fit for use by families or children — and that’s unconscionable.

I’m not really sure what their agenda is but the activists, in my view, have taken this too far. They appear to have no respect for the neighbourhoods surrounding the parks and no concern about preserving the limited green space in downtown Toronto. They have labelled the evictions “state violence” as if tent dwellers have a right to occupy public parks.

Besides, I can’t for the life of me imagine it is safer for the tent dwellers living in unsanitary conditions with rampant drug dealing, fights and fire hazards galore.

I recently wrote about how more than 70 tents have taken over Alexandra Park, leaving it unusable to the surrounding neighbourhood with garbage everywhere and grass up to my knees.

When I visited there on a beautiful June day earlier this month, I saw just a few people walk their dogs right through, not stopping.

On Thursday, I biked through Trinity Bellwoods Park — from Dundas St. W. down to Queen St. W. — and encountered the same situation.

The good news is that the tents are no longer lined up at the front of the park near the Queen St. entrance.

The bad news is there now has to be at least 70 if not more tents, small and large wood structures together with furniture, clothes drying on makeshift clotheslines, shopping carts and lots of garbage. These tents and assorted other paraphernalia are located largely along the western side of the park pretty much from Dundas down to Queen.

People walking or cycling through the park can’t miss this eyesore.

City spokesman Kris Scheuer told me Friday there were 70 structures onsite as of June 16, “but not all are occupied and some are abandoned.”

She said there 15-18 people actually living there and 81 referrals since May 2020 to inside space with supports.

Still, I couldn’t miss the phalanx of port-a-potties placed in the park for the homeless, a $3.4 million two-year contract renewed at the last council in a 19-7 vote. Even Mayor John Tory voted for the renewal.

So on the one hand tent dwellers are getting eviction notices, but on the other the city is providing them with portable toilets, sinks, soap and paper towels.

No wonder the activists feel they have a right to set the agenda and demand that the homeless continue to occupy some of our downtown parks.

I wish our politicians would just say, “enough is enough” and have the guts to clean them all out.