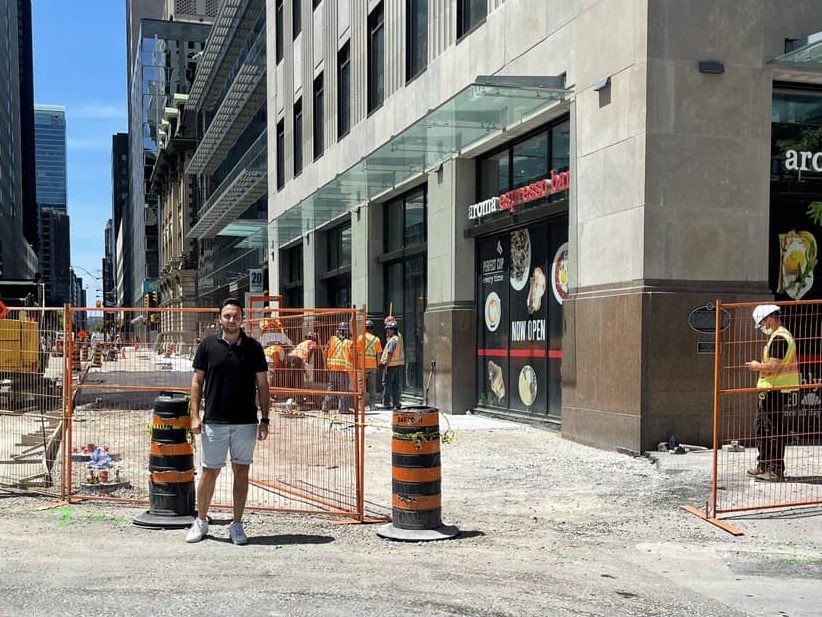 For Aroma Cafe owner Ben Chapari, surviving COVID was a piece of cake compared to the endless construction outside his downtown espresso bar.

After enduring off and on construction on Wellington St. for three years– work that blocked the sliding front doors to his cafe the entire time — he was looking forward to it all being over by the end of this summer.

Chapari said the construction started in November 2018, just a few months after he opened his doors, when Toronto Hydro ripped up the sidewalks outside his cafe and blocked access to his front doors.

After the street was put back, Enbridge Gas came back during the COVID pandemic last summer to finish fixing the pipelines under the TTC tracks — a job that took almost two months, he said.

“Our summer was a mess,” Chapari said, noting the customers sitting outside on his patio endured lots of dust.

Again the road was closed back in 2020 until this spring when the project started again.

But finally there was light at the end of the tunnel.

The city’s Feb. 19 construction notice said the work would end in late September with the replacement of aging streetcar tracks, streetscape improvements and road resurfacing. The total cost was $9.3 million.

But just three weeks after ripping up the sidewalks outside his and other eateries, the project came to a grinding halt last week.

He said his sales were already low because of the pandemic but thankfully the head office helped him through it and his landlord purchased gift cards to help out as well.

But sales dropped a further 40% when the construction started up again, Chapari said.

“No one can walk in … only my regular customers can find where I am,” he said.

Chapari got married in 2019 and he and his wife have had to hold off having children because of the pressures of the business.

He claims the city has not helped him at all.

His councillor Kristyn Wong-Tam wrote to the community on June 15 that this project was to be a “model of proper coordination of utilities and streetscape work that could save both time and money.”

Instead, she wrote, the work has dragged on for approximately seven years and forced residents and businesses to deal with many years of construction impacts.

The St. Lawrence Neighbourhood Association board wrote a scathing letter to the mayor and Wong-Tam on Wednesday calling this latest delay a “shameful and embarrassing performance on the part of the city” and noting that the street has been “dug up multiple times” to execute this complex project.

“That a surprise of this magnitude should arise at this 11th hour is very difficult to understand and should not be excused,” they wrote.

Local resident Christopher Brown said between COVID and the homeless shelters in the neighbourhood, it has been rough ride for businesses that remained there.

To suddenly find out the project was delayed is “unconscionable,” he said.

“It’s either willful blindness or gross incompetence by those who greenlighted the project if they couldn’t know in advance there might be a roadblock to completion,” he said.

A city spokesman said as construction work advanced the city encountered a number of “complex infrastructure challenges” — including conflicts with underground utilities — which impacted the ability to deliver the project in time.

“After careful consideration the decision was made to halt construction work to provide city staff and the project’s contractor time to resolve the challenges without causing further disruption to residents,” the spokesman said, noting the street and sidewalk will be restored by Saturday.

The spokesman said the delay now gives restaurants and bars an opportunity to participate in this year’s CafeTO program after months of being closed due to COVID.

Chapari said he hopes to have his roadside patio up and running by the weekend but it’s small consolation considering what he’s been through.

“It’s just going to be a temporary fix … they’re going to come back next year,” he said “I know at the end it’s going to be beautiful … if I survive.”

Previous LEVY: Small landlords hung out to dry by LTB Next LEVY: Will city finally evict campers from downtown parks?