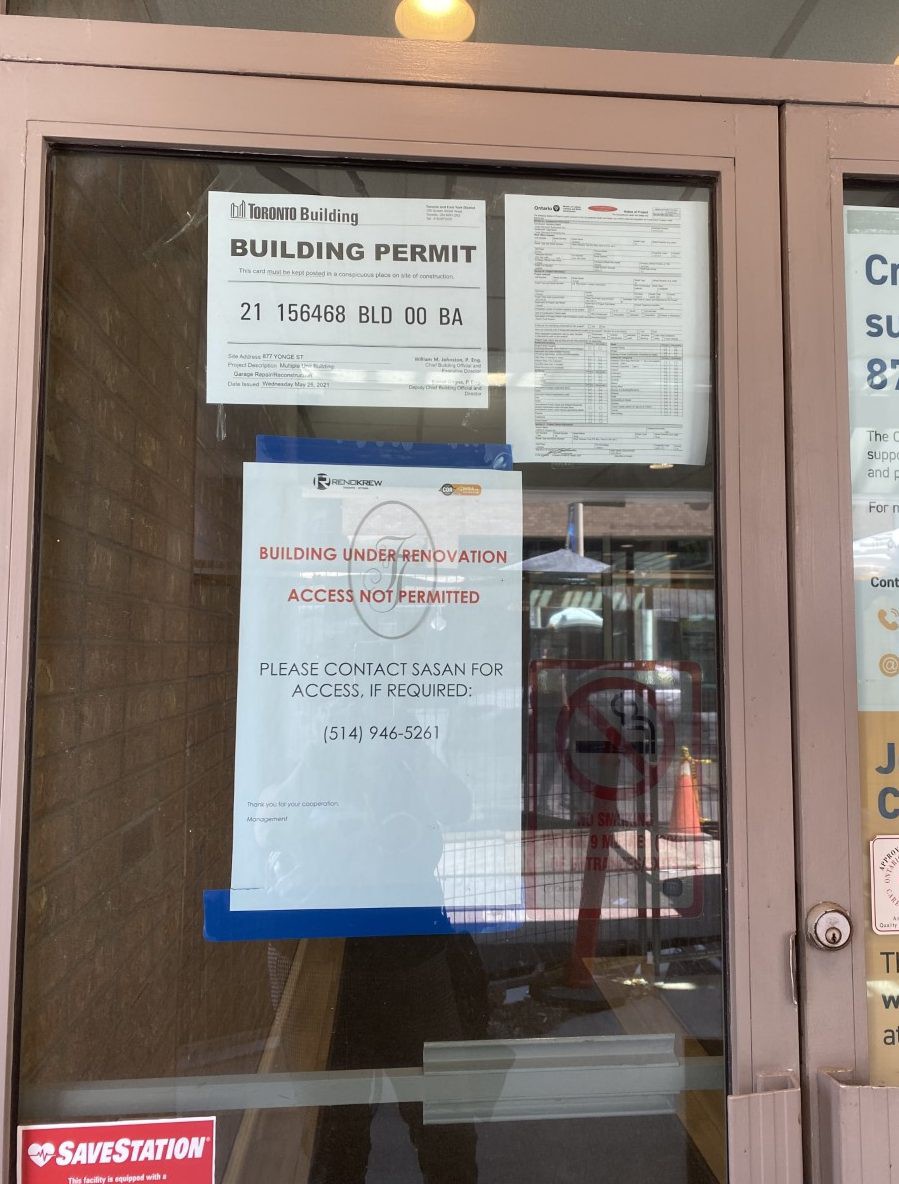 If anything has been consistent about the city’s plan to create 250 affordable homes on the site of a former Rosedale seniors building, it is the secrecy around the entire project.

Bear in mind this building was a going concern until the fall of 2019 after it was sold to a mysterious numbered company and the 150-odd tenants of Davenhill Senior Living — many of them in their 90s — were forced to move.

Most were shuffled off to three different buildings — some of them dying from COVID when the virus struck the facility where they went.

The same building was purchased by the city in April of this year for $94.9 million, $88.6 million of which went towards the residential portion and $6.3 million was for the commercial portion on the ground floor.

She called 877 Yonge St. a “good investment option” as well as “representative of the current residential/development market” in the city.

The seller sure saw the city coming.

And who was the seller?

A group of the firm’s principals became directors of the numbered company in early August of 2019, just as Davenhill Senior Living was pushing its 150 seniors out the door.

The Toronto Sun reached out to Logar, Vernon and Kumer over three days and received no response.

Efforts made to reach Bennett Jones lawyer Andrew Jeanrie, who served as spokesman for 2692518 in 2019 when the building was sold and lists KingSett capital as one of his clients, were also unsuccessful.

It is unknown for which investors KingSett was acting.

If the purchase and sale of this former seniors building has been shrouded in mystery, so too are the renovations of what are to be 252 self-contained units.

The sole remaining resident, Betty Robinson, who has lived in the building by herself since November of 2019, says an “awful lot of money” was spent by Davenhill Senior Living renovating many of the apartments two years ago. Even the carpet in the hallways, which has since been pulled up in favour of flooring, was less than two years old, she said.

Getting the costs is impossible.

Some 127 units are being renovated right now under the Emergency Housing Action plan (meaning the renovations were sole-sourced) and another 125 units will be done by December under RHI funds.

Bond refused to give the budget because releasing numbers “would compromise the tendering process,” she said.

But during a visit to Robinson’s suite last week, it was clear that 125 units won’t be ready for move-ins this month.

Robinson says, “no one is supervising … no is one checking to see if people are doing their jobs.”

Even the new operator of the building — St. Clare’s Multifaith Society –was given a sole-sourced contract of a highly unusual 50 years (less a day) duration (council approved that lease agreement last week).

According to a city report that went to council last week, council had initially approved a two-year lease to give time to issue a formal request for proposals for a long-term operator.

It’s quite a sweetheart deal, based on the city documents. The city (taxpayers) will cover the renovations, exempt property taxes and taxpayers will fund the support services and sizable rent subsidies. St. Clare’s will pay rent of $2 per year for 171,498 square feet of space and will be required to cover operating costs associated with the leased premises (whatever isn’t subsidized) and staff the project.

Bond said city staff had authority to select an operator given the “urgent need for housing.” She argues that leases of 35-50 years are common with affordable housing.

A member of the newly formed Community Liaison Committee for the project told me Friday that just 14 units will be occupied as of June 21 — that the tenants have been selected but no leases signed.

Andrea Adams, executive director of St. Clare’s, wouldn’t respond when questioned about whether some of the tenants will be coming from the nearby 21 Park Rd. respite shelter, only saying the residents will be identified and referred through the city’s Coordinated Access processes in partnership with her agency and other support agencies.

Residents living near the building, who spoke to me at length on condition of anonymity, said the city has told them there’s no reason to be concerned with such a dense building. They’ve sent countless emails to the community liaison officials for the project and don’t get responses.

Instead, they say they’ve gotten a strong message from city officials and the advocates that they’re not willing to hear any feedback or concerns.

“We’re very much getting a cancel culture response,” said one woman.

Angela Assuras, a lawyer also living nearby, said the information imparted by the city and St. Clare’s has not been “sufficient” to understand a project that will play out for the next 50 years.

“This was brought upon us in a very hurried manner,” she said. “We certainly didn’t have disclosure about substance use on site and what illegal drugs they’re using.”

When we last left 99-year-old Betty Robinson in April, she didn’t know much about who was coming into the building where she’s lived pretty much alone since November of 2019.

I visited her last week while construction and noisy banging was going on all around her unit (so much so it was hard to hear each other).

Materials appeared not to be stored properly leaving a possible safety hazard for her and the fire department has shown up constantly, her daughter Diane said.

The feisty senior refused to leave when Davenhill Senior Living sold the building and pushed out all 150 residents, many in their 90s, in the fall of 2019.

“I haven’t really spoken to anybody,” Robinson said. “There’s no communication really.”

She said often there isn’t anybody at the front desk when caregivers come in to see her twice daily.

Robinson said she’s not frightened but she doesn’t like it that so many people are coming in.

Robinson feels some of the renovations are a complete “waste of money.”

And she finds it “disgusting” that so many elderly were pushed out after KingSett Capital took carriage of the building in the fall of 2019.

“Mostly I think they (the others) were deceived,” she said. “I’m learning more to read between the lines when someone sends me a memo.”

Housing Secretariat executive director Abi Bond said they take the issue of a “safe worksite seriously” and will review the issues noted with the contractors.

“We are cognizant of our spending and are only conducting renovations where they make sense and provide good value,” she said.