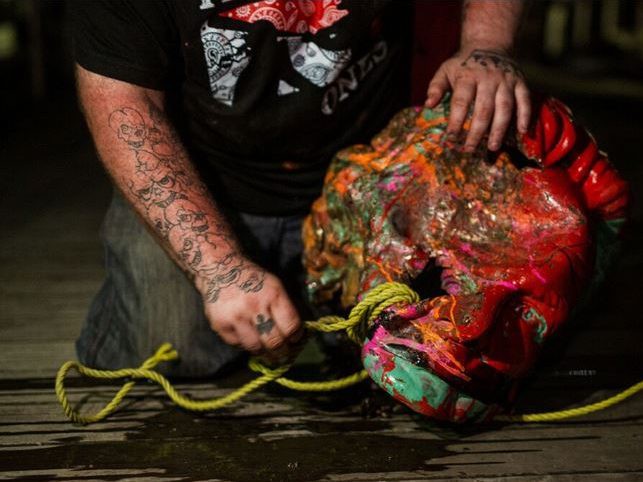 Around the same time Sunday night that famous folk singer and activist Joan Baez was receiving this year’s Kennedy Centre honours, a group of anarchists had set about toppling the already vandalized statue of Egerton Ryerson on Gould St.

Baez was known particularly in the 1960s for her anti-establishment, anti-Vietnam war activism. In 1967, she was arrested twice for blocking the entrance of a California Armed Forces induction centre and spent a month in jail.

But whether she was involved in civil rights marches or protesting the war or was resisting paying taxes or supporting LGBT rights, her actions were always non-violent.

It’s hard to imagine that she spent a month in jail for blocking an entrance to a centre where would-be soldiers were registering to be sent off to Vietnam, considering the enabling attitudes of today, some 50 years later.

Toronto Police spokesperson Connie Osborne said they are investigating the destruction of the Ryerson statue from a public safety standpoint as a vehicle was used on a public highway to pull the statue.

She said there is the potential that those involved could have been injured, as well as others in the area.

But I’m going to bet no one will be charged.

Still, I can’t help but think of Baez’s brand of activism vs. what has substituted for activism of the “woke” and the progressives, who have taken their campaigns of perceived wrongs to the streets — in a shockingly violent way.

While seemingly celebrated in other media, I found it appalling that a group of anarchists felt the need — following a rally — to yank down the already defaced statue of Ryerson on the grounds of Ryerson University, remove his head, block traffic and subsequently toss the statue’s head in Lake Ontario.

According to reports, they did so while cheering.

It reminded me of the Romans cheering on as gladiators fought to their bloody deaths — sometimes with animals involved — in the Colosseum of ancient times.

When did we lose such a sense of perspective that this kind of violent act is celebrated as a means to correct the hurts of 100 or more years ago?

The group had every right to protest the disturbing find last week of the remains of 215 Indigenous children on the site of a former residential school in Kamloops, B.C.

They had every reason to promote Indigenous rights — and to recognize the role of Egerton Ryerson in the creation of residential schools.

But Ryerson died 139 years ago after leaving a tremendous mark on education. He created public schools, school boards, uniform school textbooks and libraries in schools in addition to the template for residential schools.

We can’t simply erase his other accomplishments.

If Ryerson University officials choose to spend time and money on a task force — the Standing Strong Task Force — and hundreds of community conversations to consider whether to change the university’s name, let them knock themselves out.

But frankly, the actions of Sunday’s statue demolition crowd  — foolish and immature — represent the disturbing indoctrination of entitled and perhaps bored students and activists, who are desperately in search of a cause.

It is indicative of a culture that now tries to cancel anything that reeks of their favorite buzz words — colonialism, racism, oppression, and social justice.

Contrast that to Baez, who travelled to Vietnam and other oppressed areas, to assist with human rights causes — winning many awards for her efforts. While I don’t necessarily agree with her politics, I admire her willingness to get her hands dirty.

The fact that Ryerson’s head now rests somewhere in Lake Ontario and his headless statue is full of paint and graffiti is a disturbing indictment of our current political climate.

It tells us that if we don’t like history or someone else’s point of view, we can just erase it or tell those who annoy us to go jump in the lake.

Previous LEVY: Alexandra Park turned into Shantytown — and everyone’s to blame Next LEVY: Retired Toronto cop frustrated at not being allowed to feed his wife