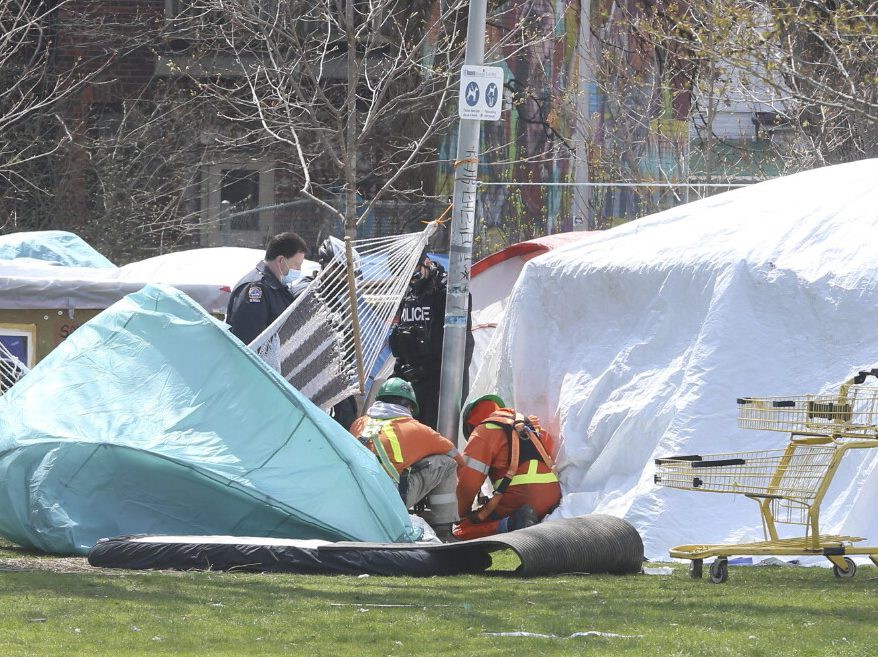 Over the past few months, we’ve heard repeatedly that the encampments in parks — many in the downtown core — are unsafe, a tremendous fire hazard, and illegal.

We’ve heard of issues with violence and drug dealing.

We’ve also been told that the city’s Streets to Homes team have repeatedly been out to the parks to encourage tent dwellers to come inside to hotel shelters — specifically put in place at a per diem of more than $220 a night to accommodate the campers during the COVID-19 crisis.

How many times does one need to hear that the city staff are doing their best to evict the tent dwellers before the heat of the summer so that families living near them — and just coming out of lockdown — can enjoy their local parks?

Well it seems not everyone at Master Control got the same memo.

At last week’s general government and licensing committee, councillors were asked to approve some $3.4-million worth of port-a-potties and sinks (with soap and paper towels) for parks with encampments. The contract is to run for one year, effective June 18, with another year’s renewal, if needed.

According to the city report, the initial contract with Nature’s Call started a year ago for 14 toilets. That was subsequently amended three times with eight more toilets and sinks added — taking the price to $591,643 and the contract to June 17 of this year.

As the report also says, the contract was sole-sourced because of the “emergency response” to the COVID pandemic.

The committee heard that in April, the city’s Emergency Operations Centre directed parks, forestry and recreation officials to acquire 28 more toilets — for a grand total of 50.

Because of the lack of lead time with this latest emergency, the report says there was no time to go to a competitive bid.

But even worse than that, it seems the need for port-a-potties and sinks for tent-dwellers is increasing, not decreasing — at the same time, we’re hearing that parks are being cleaned out.

In fact, a parks official told the committee that in February, there were 294 tents in 45 parks. Now, there are 370 tents in 58 parks.

Aside from flushing more money down the drain, it seems this is sending the wrong message to tent dwellers — a fact not lost on at least half of the committee.

Councillor Stephen Holyday said he’s “really uncomfortable” with the idea that these toilets would be needed for another two years. He also implied that parks staff appear to be working in isolation of other departments charged with evicting tent dwellers.

Councillor Frances Nunziata noted quite bluntly that port-a-potties would encourage, not discourage, encampments–as did Josh Matlow.

But city staff, seemingly caught off guard, argued the washrooms were deployed as a “response” to a need.

“We don’t put them out there to encourage the encampments,” said deputy city manager Guiliana Carbone.

Carbone reiterated more than once that “it’s complicated” to get the “tenants” (she actually called them tenants) out of parks and they’re “working very hard” to do so.

“We’re hoping to get them cleared over the next few weeks,” she said.

“In the interim, they need washrooms,” Carbone added, not seeming to grasp the idea that this enables the “tenants” to remain longer.

To be frank, it’s not that complicated.

Camping in parks is illegal and if there was the political will — and the fortitude to withstand pressure from activists — they’d be cleaned out by now.

The report was sent to council without recommendations, meaning it will be up to full council to decide on the toilets.

I’m betting it will pass.

Committee chairman Paul Ainslie perhaps captured the thinking of council when he commented that he’s not sure tent dwellers will stay in shelters.

“They’ll go back to parks, and we need toilets,” he said. “There’s a requirement to make sure our parks are up to standard for general use.”

Hate to break it to him, there will be limited general use if the tents stay this summer.

Previous LEVY: Let them out of isolation already! Next Mayor sends out strong message about Jew hatred