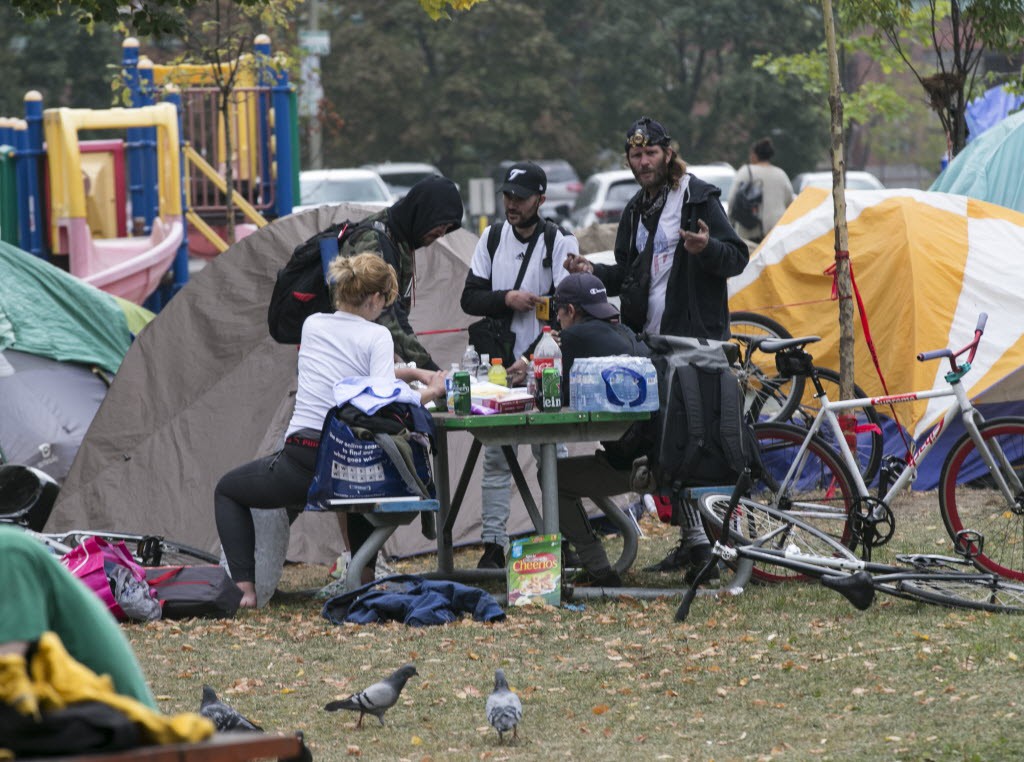 Three days ago, city officials made long-awaited efforts to clear one of the larger and more populated encampments in downtown Toronto — after putting a hold on evictions since early April.

But when Toronto Police, other city workers and two bulldozers moved in to remove the 15-odd tents and other structures at Lamport Stadium Park, they were greeted by activists, likely from the Encampment Support Network (ESN) and other poverty groups.

I wasn’t there but the activists reportedly got rather violent and obstructive, which prompted Mayor John Tory to call out their behaviour as “unacceptable.”

Then some of the homeless returned Thursday — aided and abetted, it would seem, by the activists from ESN and the Shelter and Justice Network (which appears to have been started by longtime homeless activist Cathy Crowe).

Efforts to reach both groups were unsuccessful Friday.

There’s no doubt in my mind they were convinced to stay by the activists. I saw it for myself during a trip to Alexandra Park in November 2020 when an ESN member stopped a homeless resident from talking to me.

The world has indeed gone mad when activists — allegedly trying to fight for the safety of the homeless — encourage them not to accept shelter and remain in tents in parks.

In fact, there is an entire army of artists, lawyers, actors, musicians, authors and other do-gooders who have signed letters and threatened legal action if the illegal campers are removed.

Earlier this week the Toronto Drop-in Network held a virtual press conference during which a variety of activists and even tent dwellers proclaimed it was wrong to remove people from encampments.

A former tent dweller in Dufferin Grove for 1.5 years, Jennifer Jewell, said when people are thrown out of one park they move to another and “have to start all over again.”

“I was very happy there,” she said from an unnamed hotel shelter. “I wish I was back in the park.”

Doug Hatlem, a street pastor with Sanctuary Toronto, said the city must end the “violent violation” of people living in parks.

Even singer-songwriter Sarah Harmer, who resides in eastern Ontario, got in the act on Twitter Thursday with this post:

It’s not just that the city has bylaws banning camping in public parks.

As city officials have repeatedly said — and which was outlined in a city legal brief in October 2020 — these encampments are rife with drug-dealing, “frequent” violent incidents, human trafficking, a plethora of fires and “unsanitary conditions.”

I’ve been through the parks many times and the garbage, dirty needles and other paraphernalia make Toronto look like a Third World country.

Residents living near them — interviewed by the Toronto Sun many times — have indicated they no longer use the parks where tent cities fester because they are afraid of being harassed by the tent dwellers.

I would have agreed a year ago that homeless shelters were dangerous, but not so much now. With the great pains — and expense — taken by city officials to open a variety of hotel shelters (where the homeless have their own rooms) and build modular housing, there is no excuse for this activism.

I’ve been a very vocal critic of the money spent on hotel shelters and modular housing — and some of the drug-addicted homeless put in them without supports — but the activists have gone much too far.

I can’t understand what they think they’re accomplishing other than continuing to pursue an agenda of affordable housing or bust.

Problem is, the homeless appear to be their pawns.