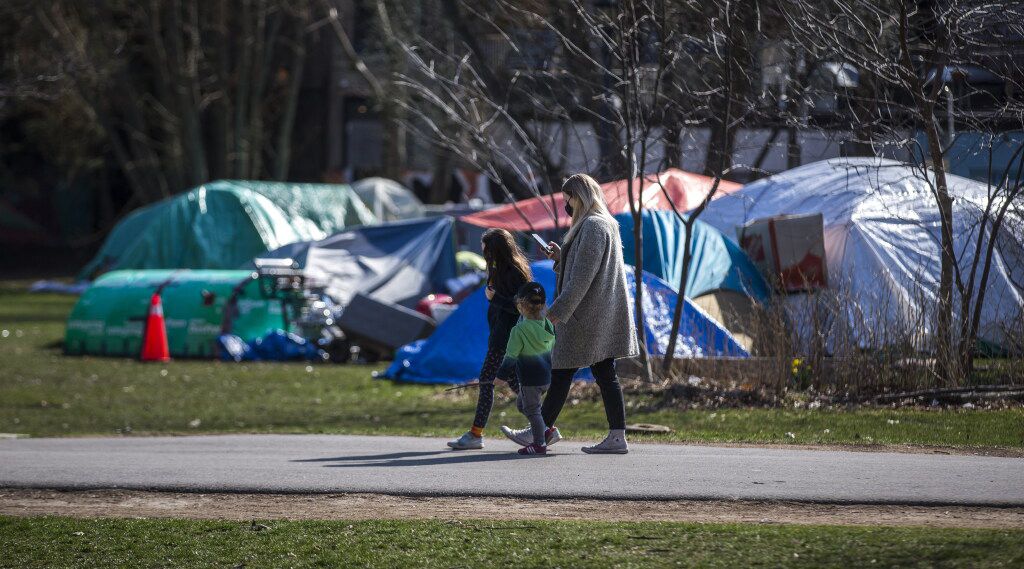 Despite efforts by activists to stop the eviction, city officials confirmed the Lamport Stadium Park encampment is gone — for now.

“There are no people at Lamport as of this moment,” city spokesman Brad Ross said Thursday.

Ross also confirmed there are up to 20 tent dwellers at Alexandra Park, about 15 at Trinity Bellwoods Park and about eight people residing in Dufferin Grove Park — all three were home to major encampments last summer.

He said there are about 450 people living in encampments across the city.

In addition to Lamport Park — where there were about 15 tents — city staff recently cleared out St. James Park.

Planned evictions in early April were put on hold when there was a COVID outbreak at the Novotel shelter on the Esplanade, which has taken many encampment residents.

At Lamport Park Wednesday several activists who turned up to try to stop the eviction clashed with police officers. They’d put out a call for reinforcements on their Instagram page.

“Many people materialized and assaulted police officers, throwing rocks and bottles,” he said.

Tory said he’s “committed” to reduce the number of tent cities in Toronto.

“They are unsafe, they are unhealthy and they’re illegal,” he said, noting one tent at Lamport Stadium was recently set on fire. “There comes a time when we have to take some action and cannot have people living in unsafe and unhealthy circumstances.”

On Thursday, Encampment Support Network featured a video of Domenic Saxiea — also featured in the Toronto Sun last fall — who’s been camped at Alexandra Park for more than a year and does not want to go inside.