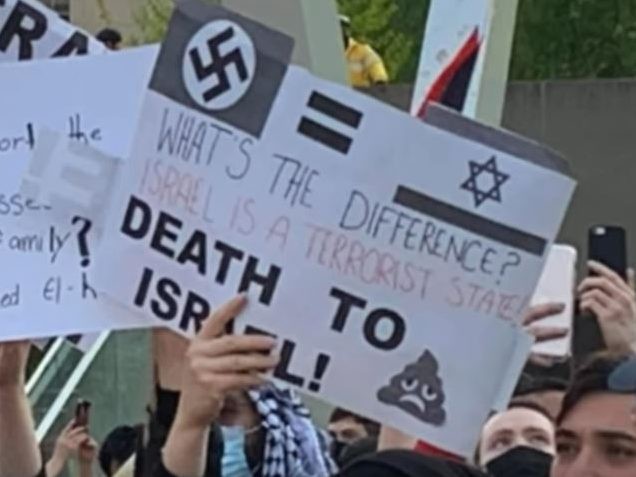 Hasbara Canada’s executive director Daniel Koren says since the latest Gaza-Israel conflict heated up a week ago, online hate against the Jewish people in Canada is the “worst it’s ever been.”

In addition to Jewish people being attacked in the virtual world, he says, there has been abundant evidence of physical attacks in the past few days — starting with a small contingent of Israel supporters attending a pro-Palestine rally Saturday night in downtown Toronto being chased by an angry group armed with sticks, carrying the Palestinian flag and wearing kaffiyehs.

Doc von Lichtenburg, who attended the protest that night and was situated with about 32 other pro-Israel supporters, said many of the attendees were screaming “death to the Jews” and “we will finish what Hitler started.”

When they tried to escape, he said, they were “completely trapped” and hit by fists, sticks and bottles as they ran up Chestnut St.

He said the online army of haters — which is fuelling anti-Semitism — has been directed at university and high school students.

A now-infamous Instagram TikTok video, viewed thousands of times, show two students at an Ontario’s Wilfrid Laurier University dancing to music while pretending to stab Israelis and burning a mock Israeli flag.  (Laurier officials have responded they take these actions “seriously” and are holding the students accountable for the harm they have caused.)

A student at another university was inviting others to attack a Jewish colleague on Facebook and to call her a “pig” and a “despicable human being,” Koren said.

“This certainly strengthens the notion that anti-Zionism is really anti-Semitism,” he said.

I can’t help but think those allegedly “woke” anti-Israel professors on university campuses I’ve been writing about for years have been doing a good job of indoctrinating impressionable young minds.

But it’s not just students.

It feels very different this time, akin to a well orchestrated propaganda campaign in which those who support Israel are subject to efforts at intimidation in the form of vile emails and social media posts like the one I got Sunday night calling me, among other things, a f—ing racist Nazi snake.

In London, Ont., Heemal Rajani, owner of the Reimagine Co. grocery store, announced in a press conference Tuesday that he was declaring his store an “apartheid-free zone.”

Reached in London, Rajani said that means they’re not selling any products made in Israel.

But Jews are welcome to buy from him, he said, insisting it’s not a “racist move.”

“We need global pressure,” he said, noting he’s urging other businesses in London to do the same.

“How is attacking Jewish people (in Canada) helping the Palestinians?” asks Koren.

Sadly, even the supposedly objective media have gotten into the act with an open letter penned earlier this week and signed by several from the CBC and Toronto Star claiming there’s a “deep reluctance (by Canadian journalists) to cover the ongoing nature of the Israeli occupation.”

Israel’s consul general to Toronto and Western Canada, Galit Baram, said Tuesday she’s worried about the expressions of anti-Semitism in Canada — in particular burning the Israeli flag, the calls for the destruction of Israel and the comparison made between Israel and Nazi Germany, as well as what happened at Toronto City Hall last Saturday night.

She said participating in protests is one thing but anti-Semitism and violence is quite another.

“This is extremely alarming and unacceptable,” she said, hopeful that police in Canada will be very firm about stopping this.

“This is not a way to express anger.”