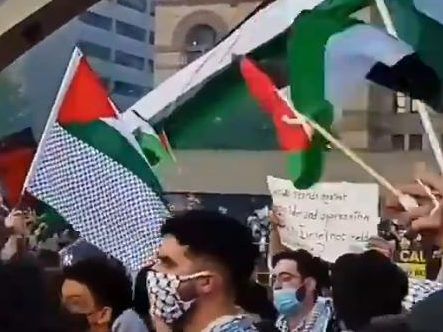 With 3,300 rockets falling on Israel from the Gaza strip so far, any thought of de-escalation of their efforts is “not on the table,” says a senior Israel Defense Forces (IDF) spokesperson.

“As long as rocket fire continues and our civilians are held hostage by (Hamas) terrorists, we will defend our country,” Lt.-Col. Jonathan Conricus said during a press briefing from Israel on Tuesday.

He said Hamas has amassed about 12,000 rockets and most are “dispersed underground under civilian facilities,” he said, adding that Hamas has the capacity to fire rockets at Tel Aviv.

Conricus added that they are very thankful for the Iron Dome technology considering the pace of the rockets has been the “highest faced” over a short period of time.

He said it is hard to get an accurate count of the deaths in the Gaza strip because the Hamas combatants they’ve neutralized are “minimized” and numbers of women and children “inflated.”

There have been 11 casualties in Israel to date, officials report.

Al Jazeera reported Tuesday that one Palestinian was killed and dozens were wounded by Israeli gunfire during clashes in the West Bank.

Two Thai workers were killed and seven people were wounded in a rocket strike on Tuesday on an Israeli farm just over the Gaza border, police said. Hamas, which rules the Gaza Strip, and Islamic Jihad claimed responsibility.

Rockets were also launched at the cities of Ashdod, Ashkelon and Beersheba, farther north, sending residents scrambling for shelter, in attacks that stretched late into Tuesday.

Gaza medical officials say 217 Palestinians have been killed, including 63 children, and more than 1,400 wounded since the fighting began on May 10.

President Joe Biden supported a call for a ceasefire although reports on Twitter on Tuesday afternoon said the president threatened jokingly to run a reporter over with his car for wanting to ask a question about Israel.

— With files from Reuters