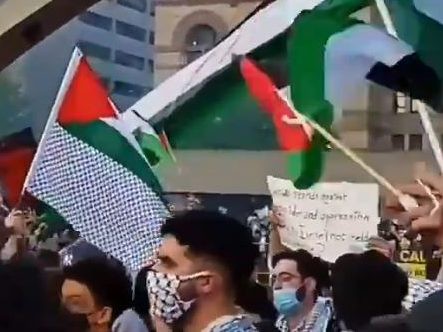 Israel-born Shawn says things got so violent at a pro-Palestine protest on a packed Nathan Phillips Square Saturday night it reminded him of the 1930s and 1940s in Nazi Germany.

Despite the provincial stay-at-home order, at least 5,000 Palestine supporters turned up to decry the latest Israel-Gaza conflict — several seemingly itching for a fight.

Shawn, who didn’t want his last name used, said it didn’t take long for tensions to escalate, despite efforts by the police to keep the 50-odd Israel supporters apart from the protesters.

The 27-year-old said after the police evacuated the Israel supporters from the square, he was chased by protesters who broke the police line and came after him and others with “sticks and rocks” down a side street.

He claimed once the police escorted them off the Square, they were left to their own devices. He insisted they did nothing to provoke their attackers.

A variety of videos from the evening and displayed on social media show protesters carrying the Palestinian flag and wearing keffiyehs while chasing after the pro-Israeli group with sticks, leaving at least one who identified himself as Zvi bloodied and on the ground.

“It got really terrifying,” said Shawn, noting he moved to Canada from Israel because he thought he’d be safer.

Meitar and her sister took what they thought was a simple drive downtown after Shabbat was over to observe the proceedings, not to interact with anyone.

She said she’d purchased an Israeli flag and put it in her car window.

On a one-way street near Richmond and Bay Sts. — where the car was stopped due to traffic — her vehicle was surrounded by pro-Palestinian protesters, said Meitar, who also didn’t want her last name used.

She added things were thrown at her car, the poles of flags were banged on her windshield and one guy jumped on her car.

She said two of the protesters took their Israeli flag and started to burn it — all of this captured on video.

“It was the scariest thing I’ve ever endured in my life,” Meitar said, noting it was a Good Samaritan wearing a cross that helped them get out of there.

Sen. Linda Frum said she hopes civic leaders will call for appropriate action and that the police will “thoroughly investigate and prosecute” those who have committed a hate crime.

“I am quite shaken by it,” she said. “This has been enabled by politicians not properly denouncing Hamas terrorism.”

Multiple efforts to reach officials with the Toronto chapter of the Palestinian Youth Movement, which organized protests worldwide Saturday, were unsuccessful.

Mayor John Tory said that hate, anti-Semitism and violence have no place in Toronto.

He added that he’s been in touch with the police chief and has asked to be informed about investigating video of a particularly disturbing incident and other documented examples of “unacceptable violence and hatred.”

Premier Doug Ford echoed that acts of “violence and expression of anti-Semitism” are “totally reprehensible.” However, he did not comment on the obvious defiance of his stay-at-home order.

Police released the names of two people facing charges: Hamza Alkiswany, 22, of Thornhill, was charged with assault and Connor Campbell, 29, of Toronto, with bringing a weapon to a public event.

TPS spokesperson Allison Sparkes said police are also investigating the alleged assault of a man by multiple people outside the square and will update the public as soon as possible.