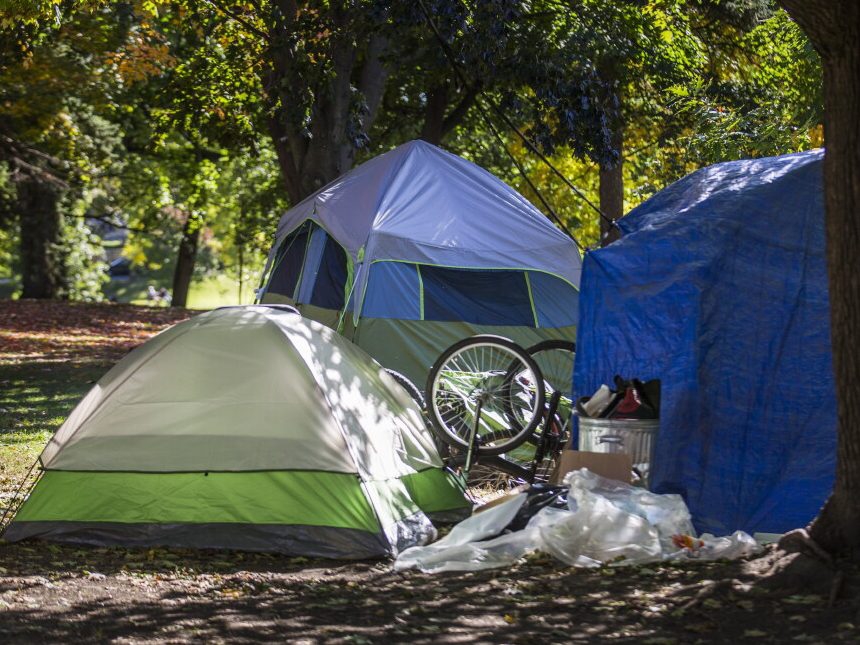 Sebastien Mayeras lives across the street from Dufferin Grove park and during the past month, he says he’s been assaulted twice by people either living in the encampment or associated with the encampment there.

Two weeks ago, it was an attack by a  trespasser who accessed the lobby of his building with a sleeping bag and was clearly high and violent, he says.

He said the intruder threw kicks and punches at him.

But the most serious attack occurred last Sunday when he was taking out his recycling.

Mayeras said he was assaulted by another trespasser hovering in the building’s bike area with a six-inch knife, saying he was going to “f—— kill him” and make him “bleed.

“It’s getting insane,” he said, noting he thought this intruder was going to kill him.

“The cops have been fantastic but their hands are so tied by what the city allows them to do,” he added. “This stuff never happened until the tents went up in the park (last summer).”

He said his eight-year-old daughter is afraid to play in the park she once loved with her friends after observing guys taking drugs in the gazebo and drug dealing in the washroom.

“No one could use the washroom,” Mayeras said. “They took over the bathroom area.”

He said last summer was “unreal” and claimed the tent dwellers were stealing bikes from the neighbourhood and then trying to sell them.

He even observed two tent dwellers go into the kid’s splash pad and start to wash themselves.

Over the winter, he said, “things got back to normal,” but when April hit, he started to notice a huge uptick in crime.

As of May 4, there were only four tents camped out there, said city spokesperson Andrea Gonsalves.

She noted that 17 tent dwellers were referred to indoor accommodation and as of Jan. 27, the park was clear of encampments — which was a far cry from last summer and fall.

But Mark Stenabaugh, who also lives across from the park and met me there last October, said the tents are slowly starting to pop again and believes there will be more as the weather gets warmer.

Last fall he told me they built bonfires every night and did their laundry in the park washrooms, stringing their clothes along the north fence to dry it.

He was also aware of passersby who were asked by the tent dwellers to buy them juice and bread at the mall across the street.

Stenabaugh told me Wednesday there is also a small group of individuals who have set up around the camp fire area of the park where they cook food and begin to beat drums all day and up to 2 a.m.

He concurred that his building has also had problems with people sneaking in and using their stairwells as washrooms and as places to smoke and drink.

I was recently told by the city’s shelter officials that the City of Toronto will enforce bylaws at encampments “after exhausting all tools and options available to help move people in encampments to safer, indoor spaces” but there’s currently no “enforcement action to vacate encampments.”

Previous Alzheimer’s patients shunted aside in LTC musical chairs Next LEVY: Bucky the Barber taking a real haircut from lockdowns