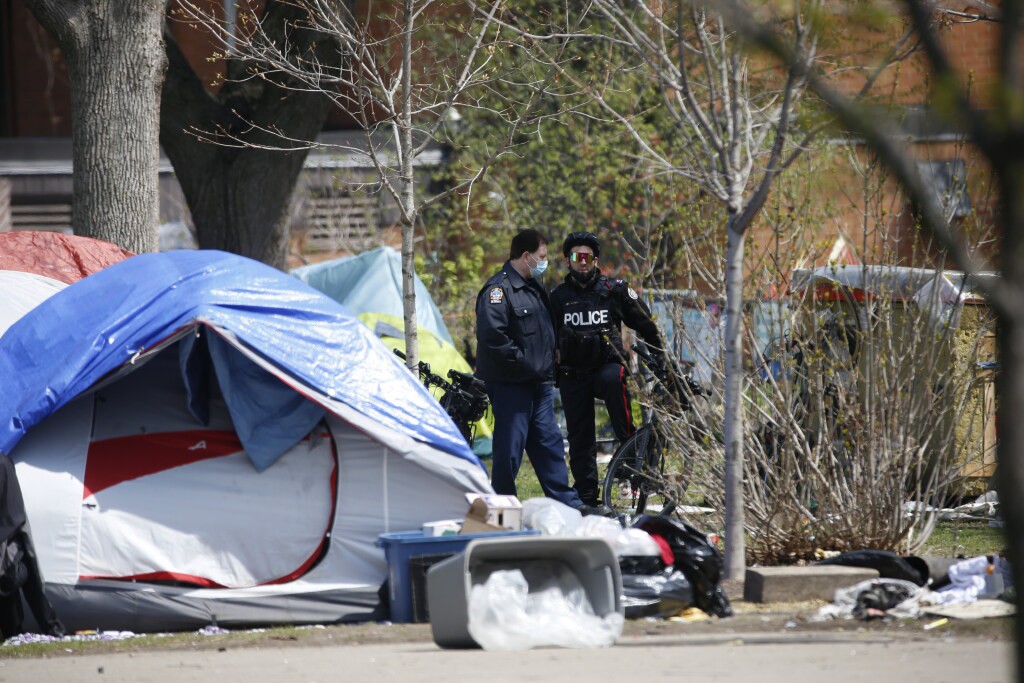 Jill lives within steps of Alexandra Park and says last weekend was the worst she’s seen so far from the park’s ever-growing Tent City.

She says she’s noticed a big influx of “very violent and very loud” people to the encampment recently — and she feels some tent dwellers are “deliberately destroying property.”

Jill is not her real name. She asked me to change it for her own protection.

Last weekend she says she watched a very large mattress fire threaten their nearby condos before it was extinguished by Toronto Fire Services.

On Sunday she says she witnessed an overdose that required CPR to be performed and early Monday residents were awakened by a violent man using a fire extinguisher as a projectile to throw at their property.

She believes the fire extinguishers were donated to the tent dwellers by volunteers who roam the parks.

“There are serious and ongoing unsupervised substance abuse issues, including alcohol and hard drugs in the encampment,” she said

She claims she has regularly seen drug transactions and says the drug trade appears to be flourishing in the park.

“The encampment is not safe,” she said.

Jill says for every individual who accepts an offer of housing from the city, a new tent-dweller comes into the park.

The numbers stayed stable over the winter but the park is “very full” now, she says.

Some 45 individuals have moved inside from Alexandra Park.

But as of April 28, city officials reported there are 89 tents, pods and wooden sheds in the same park.

And it’s not only Alexandra Park.

The city reports there are 35 tents in Lamport Stadium Park and 34 in Moss Park as of a few days ago.

Some 48 campers came inside from Trinity-Bellwoods Park, officials say, but there were 59 camping there as of April 28.

A woman living near Trinity Bellwoods Park recently wrote me to say she no longer feels safe in her own home.

She listed several examples of concerns with park campers — verbal assaults, death threats, a male deliberately urinating in front of her and another yelling at her to “get off his front yard” as she walked by his tent.

“What was once a safe, quiet, family neighbourhood … including Trinity Bellwoods park, is no longer a safe neighbourhood for women,” she said.

It’s not safe for women, men or children.

Curtis Priest, who lives downtown with his young sons and wife near Trinity Bellwoods and Alexandra Parks, says he’s witnessed assaults, harassment, vandalism, drug use and exposed needles, defecation in the streets, thefts, homeless drug users setting off his building’s fire alarms and bricks thrown through their windows.

He says the city will have to decide if our public parks are campsites for the homeless or they’re public parks for community residents.

They can’t be both, he says.

“Children and families can’t share these spaces with people suffering from severe addiction and mental health issues,” he says. “Terrible things are already happening both in the parks and surrounding areas and it’s going to get worse unless something is done now.”

Seattle, Portland, San Francisco and Venice Beach, California have all been overrun by tent cities and encampments.

The stories are similar: The tents have taken over tourist spots and green spaces with crime and drug dealing rampant. Residents are becoming afraid to walk in their own neighbourhoods.

An April 26 story on the San Francisco situation posits that a recent initiative to put the homeless in hotels and motels (sound familiar?) hasn’t worked because the city doesn’t have a homeless problem. San Francisco has a problem driven almost entirely by addiction, the story claims.

Like in San Francisco (and so eloquently articulated in the City Journal story), the problem is enabled in Toronto by a plethora of safe injection and harm reduction sites (which provide clean needles and a safe space to inject but no efforts at detox or rehab) and activist groups.

The latter group — which includes leftist lawyers, doctors, out-of-work actors, artists and authors (including Margaret Atwood) — have not only threatened to tie up the politicians and city officials in the courts if they clear the parks but have put together a propaganda campaign of signs, posters and the like to keep tent dwellers where they are.

As I discovered last fall, they also appear to regularly roam the parks encouraging residents to remain where they are until they get proper housing (even if they can’t handle it without supports).

Jill feels many of the ESN members are “privileged” (champagne socialists) who don’t live anywhere near an encampment and have no understanding of how much the tent dwellers are damaging the surrounding community.

“I find it patronizing to be told I don’t have a right to be protected,” she says.

She feels the ESN has “effectively paralyzed” the city from acting and fears it will get much worse this summer.

Kris Scheuer, speaking on behalf of the city’s shelter officials, says the city is “actively working” to refer everyone sleeping outside to inside spaces with supports and to connect people to housing workers.

But when the weather is warmer, there is usually an increase in those living outside, she says, because of reduced options to stay with friends during the pandemic, fears related to COVID-19 in the shelter system, an increase in people released from correctional facilities and the closure of mental health facilities.

She says encampments are “not an indefinite solution” to homelessness.

But her subsequent comments suggest the city is indeed paralyzed from acting.

“The City of Toronto will enforce bylaws at encampments (such as camping not permitted in public parks) after exhausting all tools and options available to help move people in encampments to safer, indoor spaces,” she said. “There’s currently no enforcement action to vacate encampments as the city continues to focus its efforts on offering the necessary means to keep people safe and support voluntary referrals into indoor space, including available hotel programs across the city.”