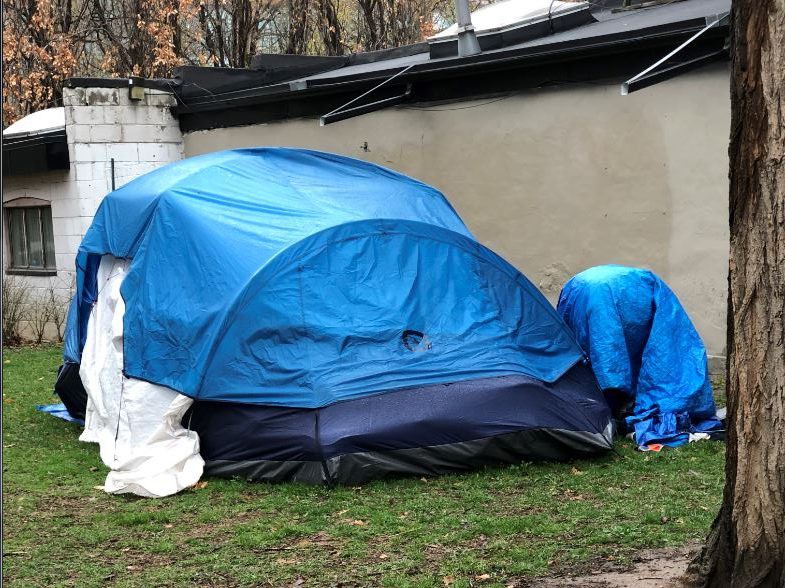 Over the past two months, downtown resident Edwina Taborsky has watched a large blue tent structure take up residence in St. James Park, near King St.

She said the tent is so large, it seems the size of a “small studio” apartment, and it looks to be permanent — situated on a platform with a table pulled outside to use sometimes (presumably when the weather cooperates.)

Since the tent arrived, she said, she’s approached the city’s municipal licensing staff and the mayor’s office repeatedly, noting — quite rightly — that camping in a public park is “illegal” (under the city’s own bylaws) and it violates taxpayers’ right to use their public park.

“No one has the right to stake a private claim to any public park,” the 81-year-old said in one email to Mayor John Tory in March.

That same month she received an email from a bylaw officer indicating a “wellness check” would be done on the camper and if this person refused to leave the park by a certain time, they’d be given a notice of eviction.

But that quickly changed this past week when the same bylaw officer emailed her to say: “Bylaw enforcement is not to take any enforcement action on people living in parks.”

Reached Wednesday, Taborsky said she’s fed up that city officials keep using COVID and homelessness as an excuse to keep the encampments where they are.

She said she feels with all this enabling, there’s going to be “more this summer.”

I agree. In fact, I suspect encampments will be a real issue as the weather gets warmer.

While a COVID outbreak in the Novotel shelter was used as an excuse to put a city-advertised April 6 eviction date on hold, one wonders if a March 31 letter from a coalition of social justice lawyers was really what gave rise to the (permanent?) hold on evictions.

The six-page letter — addressed to the mayor and Councillors Mike Layton, Gord Perks, Joe Cressy and Kristyn Wong-Tam — threatens “prolonged court battles” from lawyers and advocates across the city who are “ready to defend encampment residents’ rights to dignity, autonomy and safe housing” — places where they can consume alcohol, use drugs and visit with guests at will.

They claim, among other things, that the city’s actions to remove campers from public parks are “likely illegal” and are “clearly immoral, misguided and inhumane.”

We don’t need much more proof than this that our world has gone topsy-turvy when removing campers from a squalid environment — drug dealing, rats, unsanitary conditions, and sexual assault allegations — is considered “misguided and inhumane.”

Or that a camper’s right to “dignity” and “autonomy” trumps the rights of a taxpaying citizen to use their public parks.

City spokesperson Kris Scheuer confirmed “no enforcement action” to vacate the St. James Park encampment will occur at this time as the city focuses its efforts on supporting voluntary referrals into indoors, including available hotel programs across the city

Since last spring, at least 82 encampment sites have been cleared, she said.

Scheuer didn’t say how many have returned as the weather improves.

“The city’s ultimate goal is to connect individuals residing in encampments with the necessary supports that will aid them in voluntarily moving indoors with supports of a bed, shower and laundry, meals, harm reduction, mental and physical health supports and access to a housing worker,” she said, noting Streets to Homes workers have engaged with campers across the city 12,000 times since last spring.

Lawvin Hadisi, a spokesperson for Tory, said the mayor has been clear “encampments are unsafe and illegal.”

She said Tory supports the work city staff are doing — and have been doing throughout the pandemic — to encourage people in encampments to accept safe shelter.

She added that the city recently established the Pathway Inside program to assist those living in four encampments — Moss Park, Trinity Bellwoods, Alexandra Park and Lamport Stadium — with more than 60 people already participating

Hadisi confirmed they’ve received Taborsky’s correspondence and have sent it to city staff to resolve — as they’ve worked to resolve “hundreds” of other encampments in the past year.