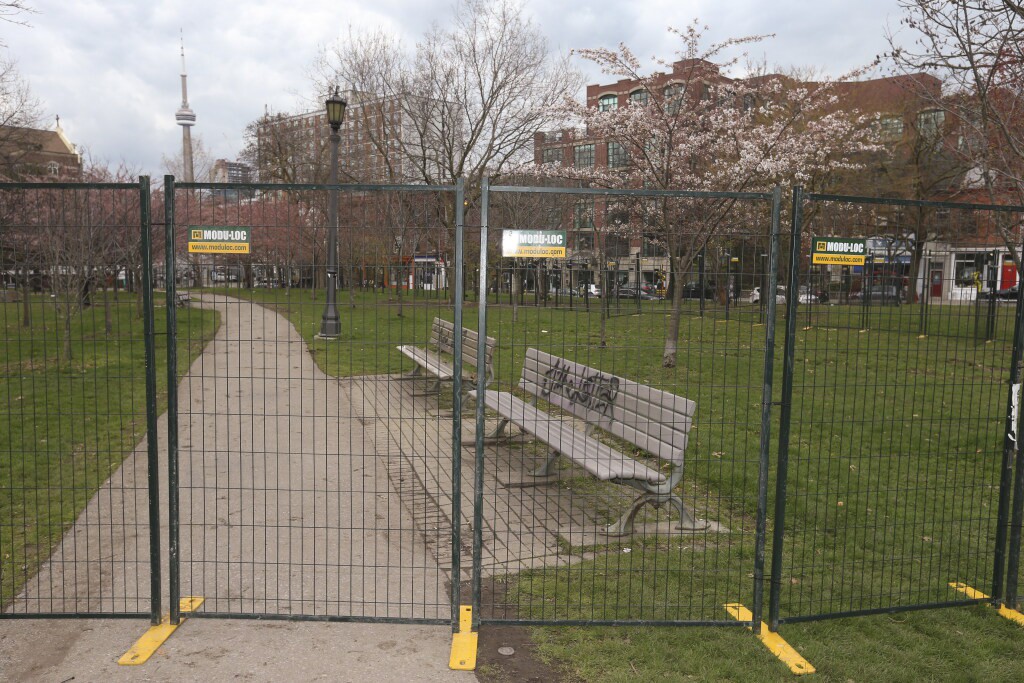 It seems the line has been drawn by city officials.

The latest in the ever blossoming restrictions on pandemic-weary Toronto residents is to fence off the cherry blossom trees in Trinity Bellwoods Park — not just in High Park.

But the homeless encampments in the park remain untouched — a testament, once again it seems, to the incredible sway activists from the Encampment Support Network have with council.

As reported Thursday, a group of pro-encampment lawyers recently sent the mayor and four NDP councillors a six-page letter threatening “prolonged court battles” if the encampments are disturbed.

They claim, among other things, that the city’s actions to remove campers from public parks are “likely illegal” and are “clearly immoral, misguided and inhumane.”

City officials had papered the parks indicating they were intending to evict campers by April 6, but that was suddenly called off on April 1 after an outbreak at the Novotel shelter.

Officials with parks, forestry and recreation confirmed Thursday afternoon that the fence enclosures at Trinity Bellwoods Park were done to “deter crowding.”

The trees were also enclosed last year during peak bloom, they say.

But I suspect that was well before an out-of-control encampment settled in there for the long haul.

Another out of control encampment on Fort York Blvd. — cleared last December after a huge propane blast there — seems to be back in business, says a man living in the condo next door.

The man, who asked that his name not be used, said the first tent appeared last Saturday and another subsequently turned up Wednesday but left at night.

He said his main concern is “safety.”

He has called both police and 311 and been given the excuse that there’s a “pandemic” out there, he said.

The encampment cleared out last December was a like a “camp,” he said, with about 15 tents that took up much of the park.

He claims they were engaged in drug deals and operated a bike chop shop there, noting several allegedly stolen bikes were found when the park was cleared.

City spokesman Kris Scheuer repeated that the city’s “ultimate goal” is to connect encampment dwellers with the supports that will aid them to “voluntarily move indoors.”

She said since the outset of the pandemic, 1,440 rough sleepers have accepted referrals to inside spaces — 400 from the four main encampment sites.

Some 210 individuals have been referred from Moss Park, 48 from Trinity Bellwoods park, 80 from Lamport Stadium and at least 45 from Alexandra Park.

“There’s currently no enforcement action to vacate Trinity Bellwoods or Fort York encampments as the city continues to … support voluntary referrals into indoor space,” she said.

Speaking on behalf of Mayor John Tory — who Wednesday encouraged Torontonians to watch the cherry blossoms virtually — Lawvin Hadisi said the city is acting in a “balanced way” to maintain health and safety while respecting the access of Toronto residents to public parks.

Hadisi said in the case of cherry blossoms, they are trying to allow people to get to the parks for some fresh air and exercise while keeping people safe “through reasonable steps to prevent crowd scenes” — which were often seen around the cherry blossoms in non-pandemic years.

She added that their dedicated city outreach teams are meeting “one by one with the residents of the encampments” and telling them for their own health and safety, alternative safe, indoor housing must be identified for them.

She says they’ve “made considerable progress with several dozen people” — although that work has been slowed by recent COVID outbreaks in homeless and hotel shelters.

Previous LEVY: City no longer enforcing its anti-camping bylaws for parks Next LEVY: Future of COVID jails for travellers unclear