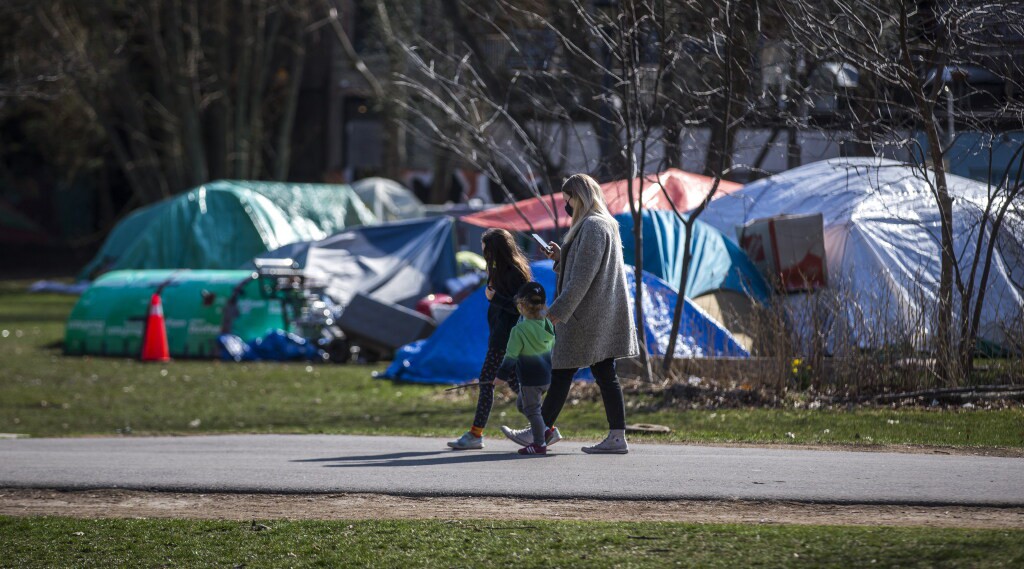 In mid-March, city officials posted trespass notices on tents and other structures in the key parks taken over by the homeless last summer.

The notices told those sleeping rough in such public parks as Moss Park, Trinity Bellwoods, Alexandra Park, and Lamport Stadium that they had until April 6 to clear out.

But it seems they didn’t really mean it — in other words April 6 wasn’t a hard deadline.

According to city spokesperson Kris Scheuer, that date was only posted to “guide peoples’ decision-making, regarding offers of shelter, housing, and other supports.”

On April 1, the city released a statement indicating four people staying at 45 The Esplanade — the Novotel Hotel shelter — tested positive for COVID-19, three of whom brought it into the hotel from the encampments.

The decision to stop new referrals to the site — even though 125 people are already in there and all COVID patients are immediately sent to a city recovery site — appeared to be a convenient excuse to put the evictions on hold.

Asked about a new target date, Scheuer reported that the city will continue to support “voluntary referrals” into indoor space, including other city hotel programs that still have capacity.

She said 16 people were present when the Streets to Homes team visited the four main encampments (Moss Park, Alexandra Park, Lamport Stadium, Trinity Bellwoods Park) but “this can fluctuate.”

Scheuer added that there are an estimated 300-400 tents and other structures in encampments on city properties which include parks, green spaces, rights-of-way, and under bridges — and about 400-450 people living in them.

The city’s recent statement said these people have been engaged by city and agency staff more than 12,000 times since last July.

That said, I suspect evictions will never happen.

I believe the message has been sent loud and clear from city officials and our politicians that encampments can stay — even though the city’s legal team indicated last fall in a filing to Ontario Superior Court that they are unsafe, unsanitary, rife with drug dealing, and not “places to live.”

Let’s not forget that these are public parks which families had trouble enjoying last summer due to the encampments.

Enter the enablers from the Encampment Support Network, a group of leftist lawyers, artists, actors, and all the usual poverty advocates.

They’re loud, they are adept at pressuring weak politicians, and last summer and fall, they spent their time passing out food, water, new tents and those green Durofoam (winterized) structures that didn’t last long.

They have spent their time circling the parks — in my view manipulating the tent dwellers into thinking they should step right from their encampments into their own homes (without any supports).

One day last November, an ESN member — Ginger Dean– followed Toronto Sun photographer Veronica Henri and me around Alexandra Park trying to sabotage our attempts to interview some park users and tent dwellers.

The ESN even came up with a No Encampment Evictions toolkit which gives those who access it a long list of numbers of city officials and politicians to call, along with suggested tweets and poster material.

In an April 4 statement, ESN claimed the city’s non-enforcement (of evictions) action is a “temporary reprieve” and encampment residents continue to live in fear of clearings. “This is psychological terror,” they said.

But the city doesn’t seem to be doing a terrific job with physically distancing the homeless in shelters, either.

As of Tuesday afternoon, there were 396 cases of COVID in 26 shelters, according to city statistics — including two cases at the Novotel.

Considering that the homeless were declared a priority for vaccines, this is surprising.

A Toronto public health spokesperson said as of last Thursday, 2,750 vaccines were administered to the homeless and staff working in homeless settings.

But get this: The vaccination is “voluntary” for everyone, including shelter clients even though the goal, according to the spokesperson, is to make the vaccines “as accessible as possible” for the homeless community.