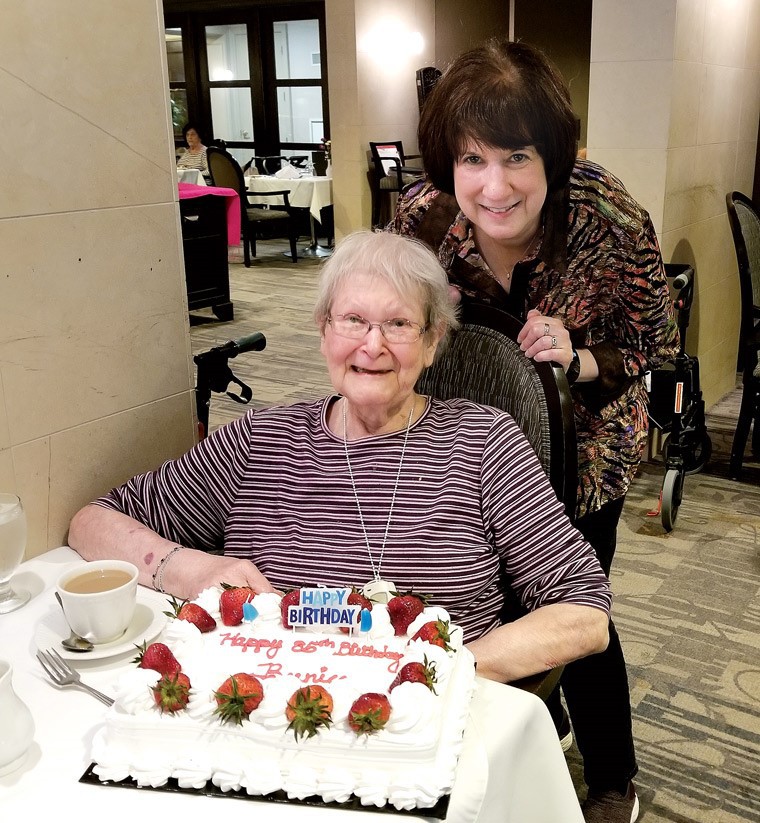 Sandy Cooper’s mom has been fully vaccinated — as have 97% of the residents in her retirement home.

Yet after three Amica Thornhill staff members tested positive for COVID-19 in the past two weeks, Bernice Cooper and the rest of the residents have been placed back in isolation, confined to their rooms for all meals.

Although they are able to walk the hallways and visit common areas — as long as they remain two metres apart from other residents — the dining room is closed.

Cooper says the dining room is often the “only outing” for her mom, who will be 87 in May and has physical limitations.

After being confined to her room almost continuously for more than a year now, what was once mild cognitive impairment has degraded so much that Bernice is no longer able to discern between clean and dirty laundry, she is so confused by the remote control she watches only one TV channel and she can’t remember whether she’s eaten or not, her daughter says.

Her feistiness at the outset of the pandemic has now turned into “complacency” and she will spend Passover — which starts Saturday night — by herself.

“She spends her days alternating between sleeping and crying,” Cooper said of her mom. “She is desperately lonely and confused.”

She wonders what’s the point of vaccinating everyone if they are still being confined to their rooms — a move she feels is “cruel and unjust.

“If I kept my dog locked up in his crate 24/7 for over a year I would be arrested and hauled off to jail for cruelty to animals,” Cooper said. “Yet keeping seniors confined to their rooms 24/7 is okay?”

She maintains things should be opening up more as people are vaccinated.

Cooper feels the Ontario government and Medical Officers of Health did the right things when the pandemic first hit but now a year later, she’s not sure they know what they’re doing.

“Nothing makes sense,” she said. “It’s all bungled.”

I would agree with her on the latter point, from the incessant and cruel lockdowns (which also kept me from visiting my mom for months) to the atrocious vaccine rollout, which has forced even those over 80 living in the community to wait four months for their second shot.

Given that studies are showing that seniors may not acquire lasting immunity with one dose, do the politicians and Ministry of Health not recognize that this will force the elderly to remain in isolation until at least July or possibly expose them to COVID-19 variants?

Cooper said she doesn’t blame Amica, which did “everything right,” but the decisionmakers in government  appear “scared to death to open up everything.”

Gillian Hering, general manager of Amica Thornhill, agrees this has been a very difficult time for residents and their families.

“We understand their desire to get back to some sense of normal,” she said.

Hering said the decisions were made by public health but they are advocating for public health to allow their dining room to reopen for the 97% of residents who are vaccinated.

Dr. Karim Kurji, medical officer of health for York Region, said although the vast majority of residents at Amica Thornhill are vaccinated, new residents coming in are “susceptible” if not immunized

Vaccinations do not offer 100% protection, only 95% at the best of times, he said.

Kurji said they don’t know if people are “still infectious” after being vaccinated — an area being looked at.

In this particular situation, at least 25 individuals were in close contact with those who tested positive.

“There are protocols and directives the province has provided,” Kurji said.

He added that the existing protocols are undergoing some review by the province and once those reviews have been done, the idea is “to relax some of those restrictions in these homes.”

But Kurji said removing restrictions from some areas, like dining rooms, will be more difficult because people take off their masks (while eating).