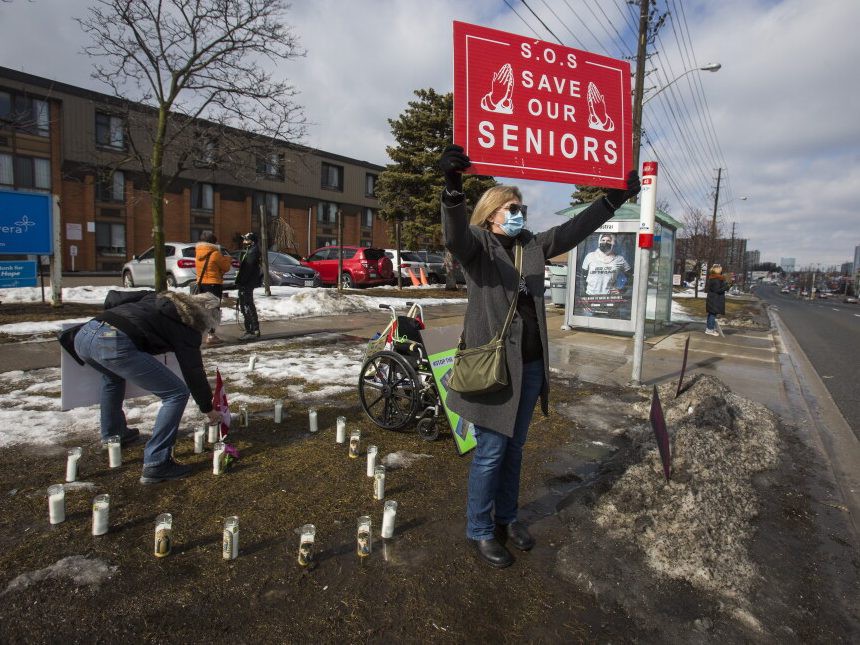 For far too many seniors in Ontario, the pandemic proved to be a death sentence.

The virulent COVID virus has cost 3,748 seniors their lives — one of them my sweet, gentle dad, who succumbed to the virus, along with 14 others, when it ripped through his dementia facility during October’s second wave.

Both my brother and I got to bid him a tearful goodbye in his hospital room. Others were not so lucky, forced to forever live with the reality that their loved ones died alone, due to strict visitation rules in some hospitals and long-term care (LTC) homes.

Let’s not forget the many seniors who also succumbed to the often draconian quarantine measures put in place to try to keep them safe from COVID.

LTC and retirement homes locked down for months on end, keeping seniors isolated from their loved ones, their essential caregivers, and even the social outlets that contributed to their mental well-being.

The first wave of COVID exposed all the flaws of the LTC system and its 600 homes that had suffered from years of neglect, mismanagement, and limited oversight under successive governments of all political stripes.

John Callaghan, lead co-counsel for Ontario’s Long-Term  Care Commission — who recently grilled LTC Minister Merrilee Fullerton for four hours — said the two things that have been made clear to him during months of testimony was the “lack of preparedness” for the pandemic and a system that was equally unprepared for the “massive onslaught” of people in an aging demographic.

“What was surprising is that we’d gone through SARS … we had all the warnings,” he said. “As a society, we don’t seem to want to be prepared for something as horrific as this … with both huge human and financial losses.”

COVID-19 exposed the province’s weak inspection system in which there are few consequences attached to findings of neglect and abuse.

COVID also put a spotlight on the secretive Retirement Homes Regulatory Authority (RHRA), which in a December 2020 audit by the Ontario Auditor General’s office, was found to be concerned that enforcement actions would place “financial pressure” on its 770  retirement homes.

The pandemic brought to light the staffing crisis and the lack of personal support workers, the crowded and decrepit conditions, and countless stories of residents left in urine-soaked beds, dehydrated and malnourished — all of these issues put under the microscope in a scathing Canadian military report delivered to the province late last May.

Let’s not forget the for-profit homes — owned by large corporations that trade on the stock exchange — who gave their shareholders dividends even as their residents suffered due to limited staffing and a lack of investment in PPE.

When it became apparent that elderly residents were declining from depression and cognitive issues due to the isolation, families were forced to beef up their fight to get in to see their loved ones.

One unsung hero throughout has been Ontario Tech University associate teaching professor, Vivian Stamatopoulos. She calculated she has put in more than 1,000 hours of volunteer time over the past year advocating for families to be granted “essential visitor access” given the “clear physical and emotional deterioration” that confinement was having on LTC and retirement residents.

Last summer, the Justice Centre for Constitutional Freedoms, filed a judicial review on behalf of two elderly residents and their essential family caregivers, seeking clarity around the guidelines pertaining to access to homes. Justice Centre lawyer Lisa Bildy said before a preliminary hearing could be held on Sept. 11, the province announced new guidelines allowing residents the right to designate two essential caregivers who’d have access to them at all times.

The government still failed to put the guidelines into a directive that would be binding on all LTC homes, she said this past week.

Although most LTC homes did start allowing essential caregivers back in, they often “imposed arbitrary limits and restrictions,” Bildy said.

The iron ring that Premier Doug Ford promised to put around these homes last May never happened.

Instead, the government sat on its hands and was equally unprepared for the second wave — which proved to be even more deadly than the first in LTC and retirement homes.

Ford’s government did have time to ram through Bill 218 in November which now forces families engaged in lawsuits for wrongful deaths in these homes to prove gross negligence instead of simple negligence.

The province’s Long-Term Care Commission, set up to investigate how COVID spread so rapidly into LTC homes, will report at the end of next month.

The question we’re left asking is, “Were these deaths preventable?”

Nonetheless, Callaghan says there’s a big recognition by those in the industry that as people live longer, their mental acuity declines — a situation that requires much more care.

“The challenge is so significant that in very short order we’re going to need a much larger strategy to allow people to live healthy lives in the community as long as possible,” he said. “It’s not economically sustainable to take care of people in the current format.”

Previous LEVY: Barrie long-term care resident back in isolation despite being vaccinated Next LEVY: Landlord says deadbeat tenant left him nearly $32K in the hole