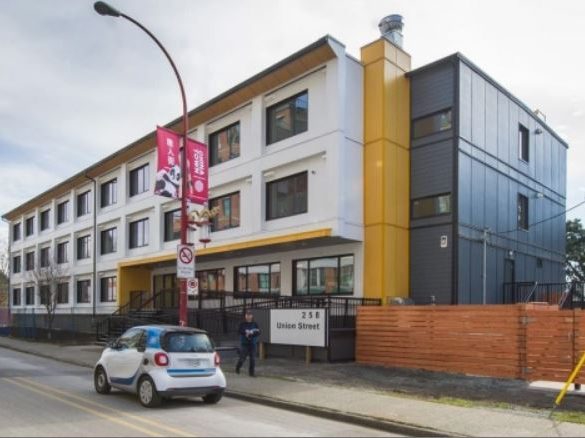 The newly-selected sites — at Trenton Ave. in East York, and Cummer Ave. in Willowdale — will house 64 units each and will cost close to $26 million — or roughly $203,000 per unit.

That equates to just slightly less than $600-per-square foot.

The successful proponent last year was Horizon North — a contract industry competitors based in Ontario said was 2.5 times the price of similar models at the same 350-square-foot size.

After a tendering process lasting much of the fall and which closed Nov. 30, city officials say they’ve gone with NRB Modular Solutions — the new name for Horizon North — a company that has provided extensive modular supportive housing in Vancouver and throughout the province of B.C.

City spokesperson Aggie Fortier confirmed Tuesday the two are one and the same company.

Council approved Phase 1 of the project last spring — to create 99 modular units on Dovercourt Rd. ( renamed from150 Harrison Ave.) and Macey Ave. — on an accelerated basis, blaming the pressures from COVID-19 and its impact on the homeless.

Industry competitors in Ontario with similar off-the-shelf models told the Toronto Sun last fall they were “floored” with the cost of models sole-sourced to Toronto, insisting it was a “ridiculous price to pay.”

Walter Widla, who works with Cambridge-based NOW Housing says their modular homes — made from shipping containers — are supplied fully finished and move-in ready with all appliances and furniture for $200-$250-per-square foot. They were able to provide a “fully accessible” washroom, as well, if needed.

Adam Smith, president of Bell Camp Modular based in Ingersoll, told me his product– which comes with a kitchen and bathroom, plus appliances– goes for about $220-per-square foot.

He said last fall they could have built modular units for half the price.

Widla informed me in November that their company did not make the city’s Roster of Approved Service Providers and could not find out why their proposal was dismissed or which manufacturers actually made the list.

“So much for transparency in the spending on this critical, but extremely expensive, program,” he said.

Last fall, Housing Secretariat executive director, Abi Bond, who came to Toronto from Vancouver last February, blamed the tight timelines of the modular housing plan’s Phase 1 for going with Horizon North’s off-the-shelf design–one that is a standard 350-square-feet with a built-in kitchen, appliances, a twin bed and other furniture.

She said the supplier was not competitively tendered in the first round because the single-source contract was “required” to “provide the fastest response possible” to housing needs created and highlighted by the pandemic.

The city gave no indication in its announcement how or why NRB Modular Solutions was chosen for the second round of housing, only noting that they are working with a team of consultants to prepare site plan applications for both sites.

Bond informed me last month that rent for the Dovercourt and Macey Ave. sites — which are essentially done and moving in tenants — is $918 per month, but tenants will pay only 30% of their income.

She indicated that will be subsidized by a variety of city and provincial sources. On-site supports, which are to be funded by provincial sources, will be provided around the clock.
The city indicated Tuesday that it’s looking for $3.1 million in annual funding from the province to pay for those supports and housing subsidies.