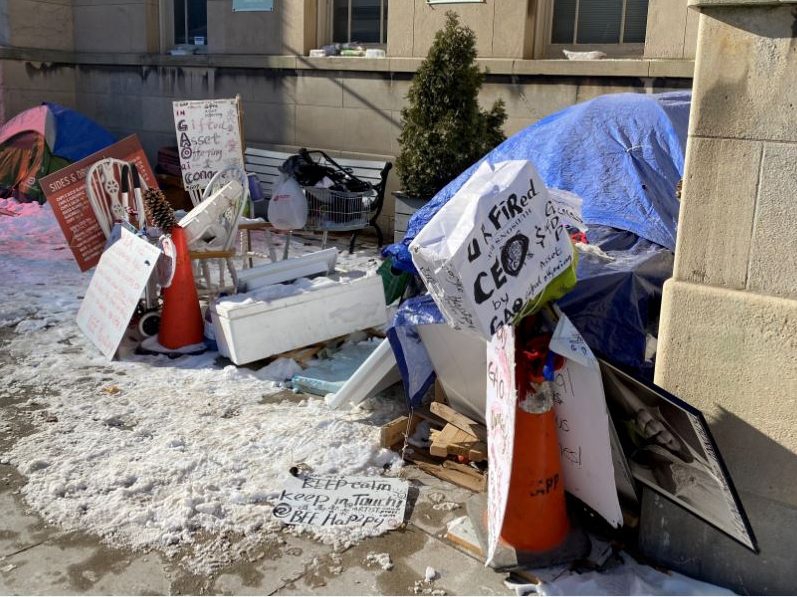 In the past week, members of the Midtown Community Safety Group have inundated 311, the city’s Streets to Homes staff, bylaw officers and local Councillor Mike Colle with calls to remove the encampment.

Group member Adam Saunders said another person — reportedly a woman — has moved into a tent on the same sidewalk and has her suitcase sitting beside her shelter.

Nothing has been done, and he feels politicians have given up, indicating there’s nothing they can do.

Saunders said both tent occupants don’t appear to live there full-time and the woman hasn’t been there for days. But people bring food and that has attracted vermin, he said.

“They (city officials) just seem to be afraid of the encampments,” he said.

“The area is disgusting … it’s pathetic,” he added, noting that there are city bylaws preventing this sort of thing for a reason.

Colle said he’s been involved with this for a few months — in touch with Streets to Homes, the police and officials at the Anne Johnson Health Centre.

The “Graffiti Guy” had promised to leave in December, but then he didn’t, he said, adding that police are worried he might act out if approached.

Part of the problem is that Health Station officials didn’t want to do anything about forcing him to move, he said.

Although the land is owned by the city, the province is the tenant.

City spokesperson Kris Scheuer said Streets to Homes staff and partner agencies have been to this site 23 times between Nov. 21, 2020 and Feb. 2.

Previous COVID cases on the rise in Toronto shelters Next LEVY: Advocates livid over $42M for LTC home security guards