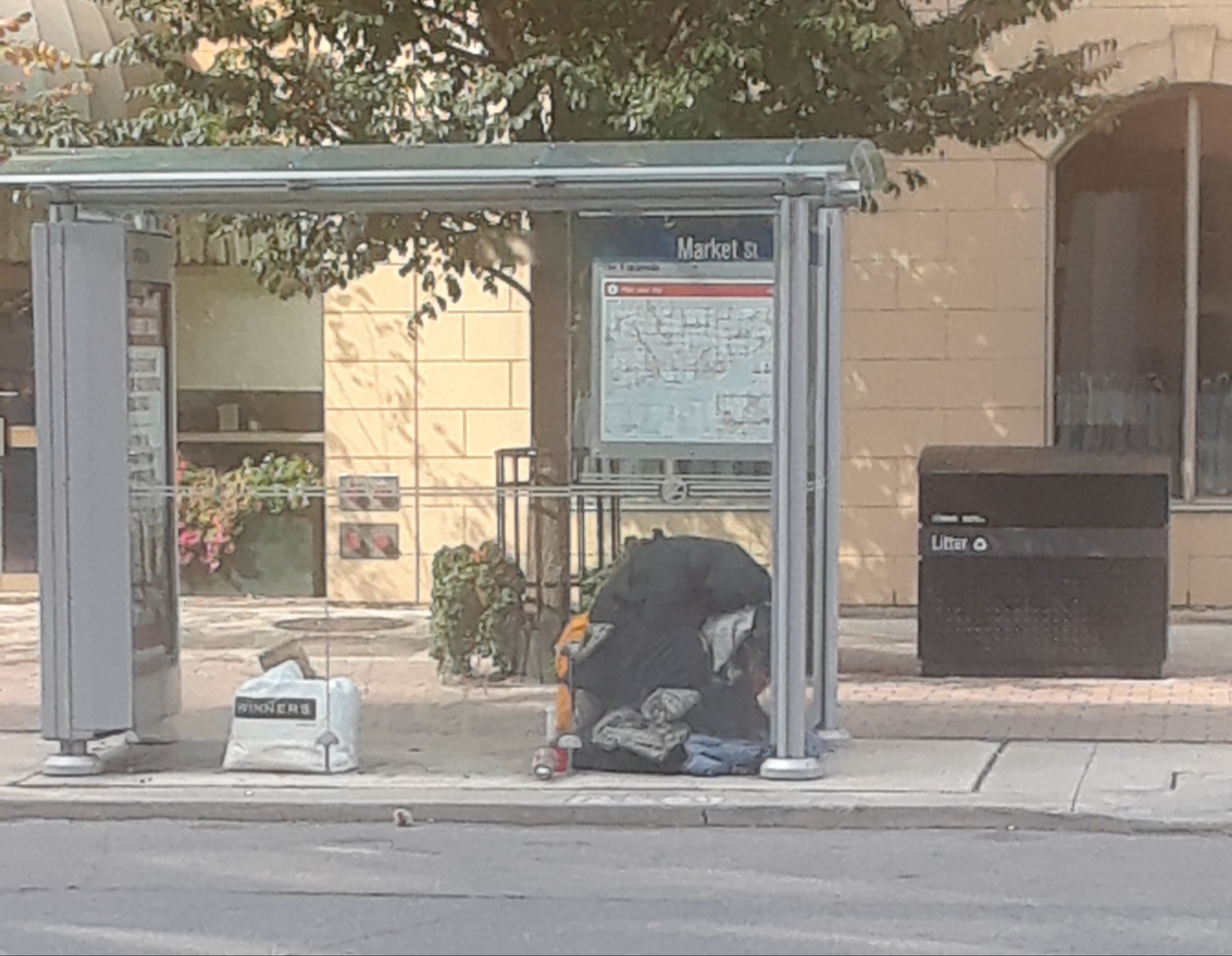 Michael Kent started his journey sleeping in our front hallway, at 115 The Esplanade

Michael shifted to the back hallway and then to the bus shelter across from 115 The Esplanade. It was obvious Michael had an alcohol problem as he could be seen drinking openly in the community. Michael basically ignored people when they told him he couldn’t do something. There was the occasional confrontation. The local shelter tried to take him in but Michael , didn’t feel safe ,it was too noisy and he didn’t want to take a shower. The shelter provided food. The community embraced Michael and reached out to help him. The mayor, counsellors, agencies, police, 911 were told about Michael repeatedly by many residents

One said “ I’m tired of all these letters”

Their reply was “ He had rights”

Periodically, agencies came, talking to him then leaving. My apartment is directly across from the bus shelter. I’d check on him first thing in the morning and throughout the day. The residents brought clothes, money and blankets.

Randomly he would scream as if tormented by some inner demon. Residents would stop and talk with him.

Michael was stabbed and robbed. We were hopeful when he was in the hospital he would get the help he greatly needed. Several days later, he returned to the bus shelter and that’s when we saw a decline.

He didn’t leave the shelter and became more dishevelled. He just seemed to sleep all the time. I observed him shaking several days before he died and called 911… I told them that I thought his wound was infected. The paramedics came, talked to him, never looked at his leg and left.

When Michael died, the community was sad and angry that the system had let him down. Michael is a statistic of policy that enables people to have rights but does not take into account that people with addiction or mental health issues cannot make conscious decisions to help themselves.

There has to be interventions. This is prevalent with the shelters that have been forced into communities. The people are only maintained (food, bed and shower); they then become the problem of the community who are held hostage.

The shelters say, “Not our problem once they leave the shelter”.

We have become prisoners in our own homes. This is all while we are in a pandemic and the homeless are not required to follow the necessary precautions to protect themselves and others while outside. These shelters are a scourge on the city, where again the system passes the buck or responds with gratuitous letters.

I thought we were better than all this .

Months after Michael died, I was approached by his family members who

were rightly devastated by what happened to him. His real name was Paul and his family had been looking for him for many years.

Why couldn’t the police or hospital use his fingerprints to find his family instead of spitting him back onto the street or waiting until he was dead?

It is a disgusting and embarrassing commentary of our city. Shame on the system for ignoring these problems and not protecting the homeless or venerable communities.

Contributed by a Resident of 115, the Esplanade

Previous LEVY: Another fire breaks out at a Toronto homeless encampment Next New homeless camp pops up in midtown Toronto