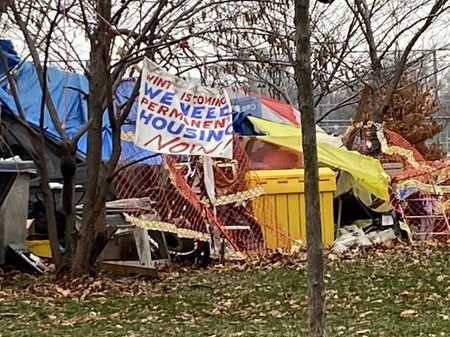 The dirty needles are everywhere and drug dealing is rampant in the parks, as a city insider recently told me.

Even though the city was given the go-ahead on Oct. 21 to evict tent dwellers from public parks if necessary, Kyle said there are “no current plans to clear encampments.”

She said the city’s focus is to continue to engage and build trust with the tent dwellers with the hope they can get the help they need– meaning both an inside space and other supports.

So far, she said 64 encampment sites have been cleared and between October and this week, 101 people living in encampments in Alexandra Park, Moss Park, Little Norway Park and Trinity Bellwoods Park have been encouraged to move to inside shelter.

That notwithstanding, the tent dwellers who remain — and there are still plenty — are caught in the middle, yet again used as pawns, convinced, I believe, to wait it out until they get housing.

Many campsites even sport signs provided to them by the advocates asking for “Affordable Housing Now.”

And the Better Living Centre, which the city spent $700K-plus on to protect clients from COVID?

But perhaps the tent dwellers are awaiting the extra 240 hotel spaces that the city is in the process of opening, according to Kyle.

She said intake into those locations will take up to three weeks.